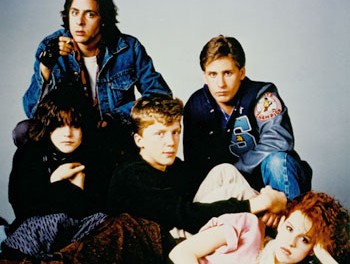 Even the best of films can be improved by the selection of songs that are used to make up the soundtrack. Indeed, often when the song selection is above average, the songs can become part of the success of a film. Simply ask Quentin Tarantino about such matters.

In the 80′s you couldn’t have a big film without having a big song that went along with that film. That probably had a lot to do with the popularity of music videos. If the song’s video could be packed full of scenes from the film then every time it got played on MTV it was a free advertisement.

The marketing ploy worked because even to this day there are some 80′s songs that I simply can not hear without having scenes from the corresponding movie popping up in my head. Here are five examples of 80′s songs that are, for me,  forever linked to an 80′s movie.

Don’t You Forget About Me – Simple Minds

If there is one film that screams ’80′s music soundtrack’ then it has to be Don’t You Forget About Me by Simple Minds.  There can’t be many children of the 80′s that don’t have their mind flooded with images from The Breakfast Club dancing through their head.

Literally dancing probably because that image of Molly Ringwald, Judd Nelson and crew doing the dance along the railing of the school library is the first to appear.  Proof of the power of the music video though because that scene in The Breakfast Club doesn’t actually include that song. It shows up on the TV monitors behind Jim Kerr in the music video for Don’t You Forget About Me.

Ah, the power ballad. The first Karate Kid had its own song with the You’re The Best by Joe Esposito but for me the Karate Kid song that is most welded to one of the movies actually comes from Karate Kid II.  Whenever the airy sounds of Peter Cetera singing  Glory of Love come across the airways,  Mr. Miyagi and Daniel are back in Japan. Even upon the first note of the song, I see Daniel breaking the stacks of ice in a strange Japanese bar.

The Power of Love – Huey Lewis and the News

Pushing aside glory, we now have The Power of Love by Huey Lewis and the News. I am not at all afraid to admit that I listened to my cassette tape version of their album Fore so often as a kid that the writing on the front was totally worn off. As easy as Huey Lewis is to mock these days, it was proper good fun music for me back then.

Apparently, I wasn’t the only one that liked them because when a soundtrack was being selected for Back to the Future somebody obviously thought they would make the perfect music to risk your life to as you skateboarded while clinging onto the back bumpers of moving cars. Good times! Just the opening synth notes have to play before I am seeing a denim clad Michael J Fox making his way through those streets.

Being all of eight years old when Sixteen Candles came out, it went a long way to shaping my image of what a high school dance would be like.  As far as I was concerned, the most romantic thing that could ever happen at any dance would be asked to dance while Spandau Ballet’s True was playing.

When moving to the UK, where Spandau Ballet were one of the most successful bands of the 80′s, I found myself to be pretty much the only person  I knew here that was unable to  listen to True without images of Molly Ringwald and pals hanging out on school bleachers  at a dance launching in the brain.  I think this possibly could because it was such a proper hit on its own here that it isn’t so linked to the film.  However, I know that amongst my fellow American 80′s children this song is always about Jake Ryan.

Okay, this one may be slightly cheating because it does have the actual name of the movie in the song title. Plus, at various points on the song you hear ‘Goonies, Goonies’ going in the background.  Still, it counts for me because I can’t hear the song or see the film without associating one with the other. Plus, it does sound a lot like the song already existed and then they added the Goonies bit onto the tittle and the song.

The older I get, the more that I enjoy looking back on Cyndi Lauper videos because she was almost too tongue in cheek with her ‘act’ for the kids of the time to fully appreciate. What a great sense of humour and a great voice hidden under that orange hair! The use of so many of of the professional wrestlers of the day in her videos and as her body guards was just so much fun. Dare I say it, I like her way better than Madonna.